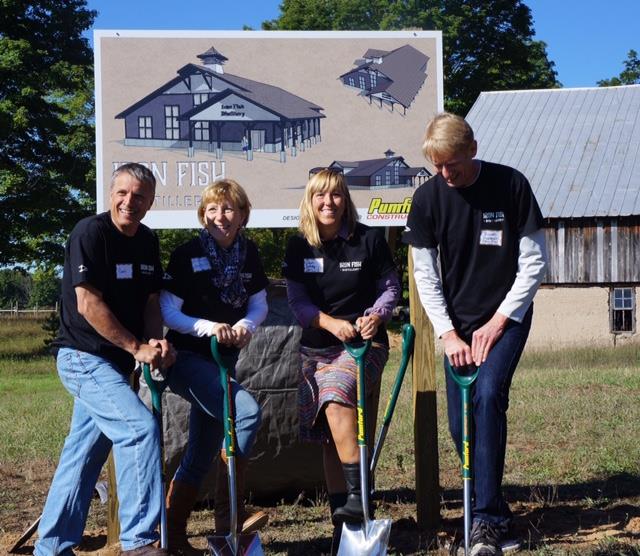 Nothing like a good ground breaking! We were overwhelmed by the local community and media turnout for our late September 2015 ground breaking. Over 50 community leaders and neighbors found their way down Dzuibanek Road to join us on a brisk Monday morning for the big reveal of our building design and farm-based distillery plans (and we turned some earth too!).

We were super excited that acclaimed northern Michigan poet, Michael Delp, kicked off the event with a reading on the spirit of the steelhead trout that run the nearby Betsie River and many of our northern Michigan rivers. Check out his work.

Tonight, just before I fall asleep, I hear the wind kick
up in the red pines outside the house. I begin to go
under, begin to submerge myself in a dream I know is
waiting for me. “The steelhead run with the wind,” I
remember someone saying. And I think of thousands
of fish gathering at the mouths of rivers up and down
Lake Michigan. I begin to think of my bed and how I
lie on top of it as some way I am able to hover just over
the dream. As if the dream itself were made of water
and I could lower myself down into a river choked with
March ice. Holding. Just off a river mouth.

I listen. Underwater the wind sounds like thousands of
waterfalls. A dull roar. A roar coming from far off and
seeping gradually into my head. There are hundreds of
fish waiting. They fan slowly, move up and down, some
sideways in the current coming out of the river.

If I listen clearly enough to the inside of my head, I can
hear the sound of some old command, some old mem-
ory let loose far upstream calling me in.

The water turns chemical. Chemicals loose in the tiny
brains of these fish washing through their bodies, urg-
ing them up river.

They surge through deadfall, upstream, rounding bends
deep underwater, the sound of the river mixing with the
sound of wind. All chemical. Something drifting now in
their bodies. Bodies that look like pure aluminum mus-
cles loose in the water.